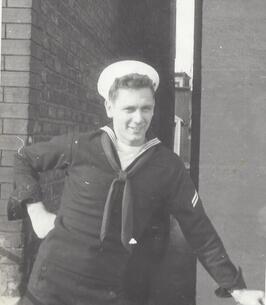 John Giovacchino, age 81, passed away peacefully in his sleep at his home on August 18th, 2021. John was the widow of his beloved wife Betty, who he was married to for almost 50 years. His family takes great solace in knowing that he is reunited with the love of his life. He was born in New Haven to the late John and Caroline Giovacchino and was raised in the Woodbridge Avenue section of Ansonia, where he spent much of his youth stirring up trouble with his cousins and close friends. After his family moved to Oxford in the 1950’s, he enlisted in the United States Navy as a teenager, and served proudly aboard the U.S.S. Yorktown. After he was honorably discharged, he met his wife and took great pride in helping to provide a wonderful home for their family in Oxford. While living there, he held several positions within the Quaker Farms Volunteer Fire Department, including Captain and Chief, earning himself the distinction of being named a lifetime member. John began his career as a machinist and welder at Dickgiesser’s, but soon turned to construction, becoming a self-employed building contractor opening J&A Construction. He took a great deal of pride in running his own company. He would later use his skills to take on the position of Mill Manager with Stevenson Lumber, from which he retired. He was an avid woodworker, who enjoyed spending time in his workshop always working on the next project or making furniture for family or friends. John is survived by his three children, JohnP. Giovacchino of Seymour; Cynthia Giovacchino of Oxford; and Jeff Giovacchino and his wife Deborah of Oxford; his special grandson Alex Rushworth; and step-grandson Christopher Fourtin. He is also survived by his sister Carol Edwards of Oxford; brother-in-law Joe Mumley and his wife Pam; sister-in law Evelyn Bernier and her husband Richard; sister-in-law Barbara Minnix; as well as several special cousins, nieces, nephews, and lifelong friends. John was a man of few words, but showed his love for those he cared about through his generosity and his actions. He will be greatly missed by all of his family and friends. Funeral Services will begin on Wednesday, August 25th at 9:00 a.m. from the Ralph E. Hull Funeral Home, 161 West Church St., Seymour followed by a celebration of mass of Christian burial at 10 a.m. at St. Thomas the Apostle Church, 733 Oxford Road, Oxford, followed by internment with Full Military Honors will be in Brookside Cemetery, Oxford. Family and friends may call on Tuesday from 4 to 8 p.m. in the Ralph E. Hull Funeral Home. In lieu of flowers, memorial contributions may be made to the Quaker Farms Fire Department or St Jude’s Hospital. Please share a memory at www.hullfh.com